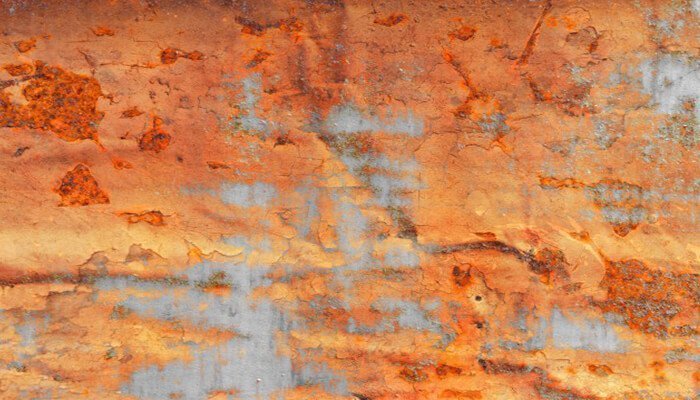 Corrosion leads to the deterioration of materials and affects resources, which is a significant problem. One step towards solving this problem is understanding the different types of corrosion.

In this post, we will cover 19 different forms of corrosion to help you understand them faster, and when to distinguish them.

Despite their differences, they have one common characteristic. All types of corrosion weaken materials. Weakening occurs because of oxides and salts.

Uniform corrosion occurs when a chemical reaction affects a whole exposed surface. Usually, it happens when you expose metals to open atmospheres such as water, air, and soil. Affected metals become thinner and then fail in the end. Even though the uniform attack corrosion affects most metals, it is easy to spot. Once detected on time, it is possible to manage.

Localized corrosion is the opposite of general attack corrosion. It is a type of corrosion that attacks some parts of metal surfaces while leaving other parts intact.

This type of corrosion is further categorized into different forms discussed below.

This corrosion is one of the most destructive. It is also not easy to predict or detect this type of corrosion. The name “pitting” originates from the pits or holes the corrosion leaves on the metal surfaces it attacks. Pits penetrate downwards into the surface.

Pitting can originate from a chemical attack. An example of a pitting attack is when aerated water gets into contact with steel. It can also originate from a mechanical attack like an impact that destroys the oxide film – a protective layer.

Crevice corrosion occurs when shielded areas get exposed to corrosive environments. It takes place in areas with an inadequate flow of oxygen, like under bolt heads. The difference in ion concentration in the two areas is the leading cause of this corrosion.

Another name for this localized corrosion is “under-film corrosion.” It occurs underneath a coating and manifests itself as threadlike fibers. Oxygen concentration cells cause filiform corrosion.

This corrosion occurs when metallic areas accumulate different forms of debris and dirt. Wheel wells are an example of where poultice corrosion is most likely to occur.

In this type of localized corrosion, deposits of a more noble metal get deposited on the less noble metal. These deposits then encourage pitting.

For example, water can pass through a copper pipe and collect some copper ions. Deposition corrosion will occur when those ions are deposited in an aluminum pipe.

De-alloying occurs when an alloy loses one of the elements. For instance, Brass, which contains copper and zinc, experiences de-alloying when the zinc is removed, leaving behind the copper.

High-velocity movements between corrosive fluids and metal surfaces cause erosion-corrosion. This type of corrosion occurs because of the mechanical abrasive action that comes with the rapid movement.

This type of corrosion also goes by the name two-metal corrosion. When two, unlike metals, are electrically connected, the more active one corrodes faster than the other.

The active metal becomes the anode, and the other the cathode. The corrosion rate of the anode usually increases when the metal connects with the other metal.

Just like the name suggests, heat is the cause of high-temperature corrosion. It is a type of corrosion that is not dependent on liquid electrolytes.

The metabolic activity of microorganisms is what deteriorates materials. Microorganisms create biofilms, then alter the environment at the surface of the metal. After the alteration, deterioration begins to occur.

It is a more severe form of intergranular corrosion. In this type of corrosion, metal gets divided into layers along the grain boundaries. Exfoliation corrosion leads to the loss of surface material.

As the name suggests, stray current corrosion occurs when current flows through a different path other than the intended one.

When electrical currents enter metals from other sources, corrosion accelerates. Reducing the currents that flow through nearby systems is one way of preventing this type of corrosion.

This broader exfoliation is that which occurs in light metals with low densities. Examples of light metals include aluminum and magnesium.

Old pipes that have already been exposed to corrosion and have developed pits can hold the caustic agents found in cleaners, thus, increasing corrosion.

Like erosion-corrosion, impingement corrosion relates to velocity. The impact sustained from the impingement of high-velocity flowing particles causes this type of corrosion.

This type of corrosion occurs from an abrupt creation and collapse of vacuums and bubbles.

Therefore, cavitation corrosion is a combination of cavitation and corrosion. Turbulence in a liquid is what causes the sudden creation and collapse of bubbles and vacuums.

This is an electrochemical type of corrosion. Air and the pollutants contained in air cause corrosion. Habitually, in the form of a thin film, electrolytes form on surfaces under certain atmospheric conditions.

Only when a certain level of humidity is reached does the film form, and these levels depend on the type of metal.

Understanding the types of corrosion is one step towards managing corrosion.

For instance, caustic agents are not a good match for old metal pipes. It would be best to avoid household products that contain these agents.

Additionally, remember that reducing the current flowing through systems adjacent to metal surfaces is a wise way of preventing stray current corrosion.

Have you encountered one or more of these forms of corrosion listed above?

Or maybe you met the forms that I didn’t mention here.

Let me know in the comments or on LinkedIn

Marketing @ Yubisteel. He is one of the Experts for Hard-To-Find Metals.

Ready to get started?

Contact us today to learn how our customized plans can help grow your business.